Wifi Wars is an audience participation gaming event which is currently touring the country, and it was held at the Exeter Phoenix on Thursday 7th July. Rob and I went along…

The event is the brainchild of Rob Sedgebeer and Steve McNeil behind the airing-in-the-near-future TV gaming show “Go 8-bit” (hosted by Dara O’Briain).

To join in, you connect to a wifi network using your mobile phone, and then you visit a web page which then allows you to control aspects of the games (triggered by the presenters). I had a go at a similar thing at the Mozilla Conference last year and it worked pretty well, but this had a lot more polish to it!

The guys bring 4x access points, 2 laptops (for game control, projection, VR demo etc) and everything runs in HTML5 with a NodeJS backend. We had an awesome night of gaming, despite there not being many people attending!

Some pics from the Exeter event: 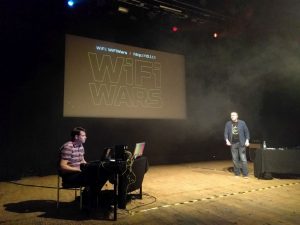 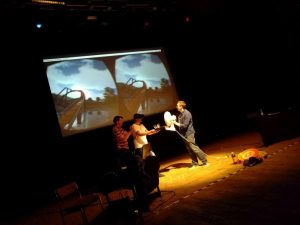 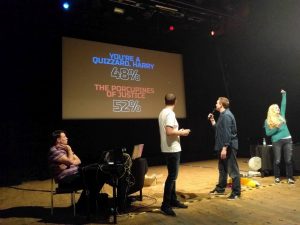 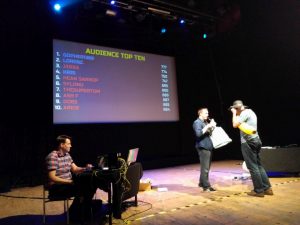